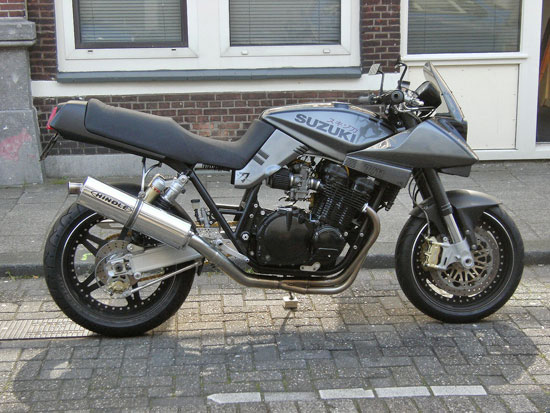 the SkizzoKat is done! finally! well.. I took a short cut and stuck in a stock EFE lump instead of the big block engine I had planned, but for this stage it can at least be enjoyed on the road before the new engine has been built.. in fact it has been for over a year now, but I was too lazy to post about it on here.. :-/
anyway.. despite the stock engine the performance has surpassed my expectations, the steering is so precise I'll bet it rivals any modern bike.. the lack of a separate sprocket carrier however means the drive is rather snatchy, which I had to get used to (keeping minimal chain slack does help a lot), but otherwise the ride is pretty smooth.. especially the front KTM SuperDuke forks offer great feel with no flex at all..
Hope to be putting up more detailed spec on the SkizzoKat but I'd better not make any promises.. ;-)
arnout 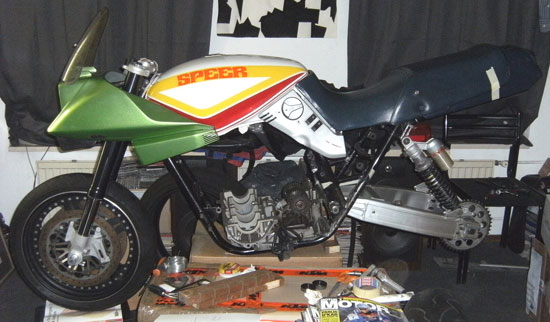 well.. while it may seem I haven't been doing anything bike related anymore -as it's gone a bit quiet on here- I've actually been quite busy with a new project lately!
yup, instead of rebuilding my GSX I decided I'm going to build another Kat :-)
but as I had already gathered so many (engine) parts for the original GSX-project and the GSX frame was already braced too, I thought why not merge them into one bike? Katanas and ET/EXs mostly only differ in bodywork.. so if I keep the old bodywork lugs and only add new lugs for the Katana tank and panels I could switch back and forth.. :-D
with this in mind it the new project name soon came to mind: "SkizzoKat"..
as I'm also keeping myself busy with webmastering duties on the Dutch KatanaClub site, the emphasis will be on getting the Katana-part done first..   arnout 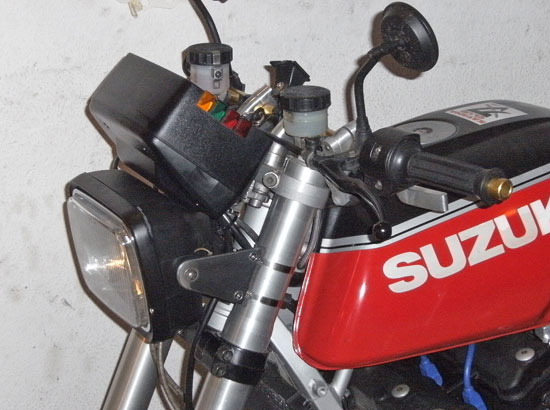 yup.. I'm still here.. ;-) and the EFE is still running and being fettled..
I've been doing a lot of km's on the EFE so life's been good most of the time..
some things on the EFE have needed attention though this past time like the starter clutch and -the old Suzook regular- the charging circuit..
other tweaks and mods have been done too and I'm happy to report I've got a big addition to the tool collection as well..
as usual I have kept track of it all by taking pics regularly and I've put it all together again on a new EFE project page.. :-)   arnout

after months of working on the EFE I feel I have been neglecting the site..
this is actually the first post of 2010 and it's already July! tssk..! :-|
well.. in my defence I can say that the long postponed fitting of the 1327cc block took a bit more work than initially intended.. the several setbacks encountered required a lot of my time and attention..

and now that it all seems to work properly *knocks on wood* I've collected all the pictures I took and added another EFE project page.. so have a look and but make sure not to copy my undertakings.. ;-)   arnout

in order to operate the old set of RS36 flatslides I once did up I really needed to get a push-pull thottle.. but instead I tried my hand at some plastic welding to just attach a mounting point for an additional cable..

apart from obviously saving money not having to buy another throttle body this also saves space on the handle bar or the need to redo the wiring in case I'd swap it for a later (GSX-R SRAD or similar) switch gear unit..
so.. just need to fit the stuff onto the EFE and swap the Mikuni BST38s for the RS36s and.. ride..!
arnout